Aspen Equipment expands its territory into Missouri and Kansas 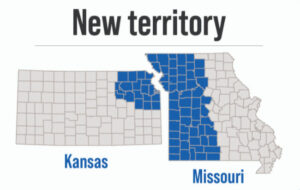 Aspen Equipment has announced its expanded coverage in the U.S. Midwest by adding parts of western Missouri and northeast Kansas to its territory. With this announcement, the Company will add 74 counties in the two states serving National Crane boom trucks sales, rental, and field service.Aaron Carlson, Aspen Equipment’s director of sales, said the latest territory expansion leverages the strength of its operations in Minnesota, Iowa, and Nebraska, and its desire for growth, as the Company anticipates a rise in boom truck and truck upfitting demands in the future.“With this strategic expansion, Aspen will be well-positioned to take advantage of the uptick in construction and utility work in the coming years,” Carlson said. “Expanding into Kansas and Missouri is an important step that enables us to serve customers in regions that are expected to grow.”To lead this expansion, Joe Rowan has been appointed as Territory Manager, with Aspen’s facility in Ankeny, Iowa, serving as the main support hub for the new territory.Founded in 1926, Aspen Equipment has built a reputation for National Crane sales, rental and product support. It has four locations serving a broad range of end market customers: Minneapolis; Quad Cities and Des Moines, Iowa; and Omaha, Nebraska.